The proposed scheme will be run-of-river and will be designed with an approximate installed capacity of 360-400kW. It will feature the following infrastructure:

The scheme is located on the Allt Achadh na Moine burn and is a run of river system not requiring a dam. Instead there would be a small weir which would feed water into a buried pipeline which descends alongside the burn, crossing over a pipe bridge once for a length of 850m and descending approximately 120m to the turbine house located adjacent to an existing forest track.

The maximum power output is planned to be 400KW with the primary turbine rated at 320KW subject to variation in proportion to flow of water down the burn. Power produced by the turbine will be sold to the National Grid via a new line connecting onto the existing power lines some 1.2Km from the turbine house.

Geography of the site

The site is approximately 5km northwest of Craignure and 24km southeast of Tobermory. The Allt Achadh na Moine burn is an upland oligotrophic watercourse, with its source in the hills to the South of Garmony. Draining the Coire Clachach on the northern flank of Beinn Thunacaraidh, it quickly descends in a series of cascades and waterfalls before entering a large area of Sitka Spruce plantation. The burn continues to descend a number of other cascades and small water falls before entering a large area of recent deforestation, where it levels out before entering the sea at Garmony Point. 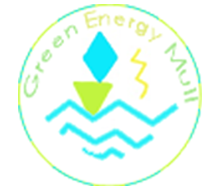